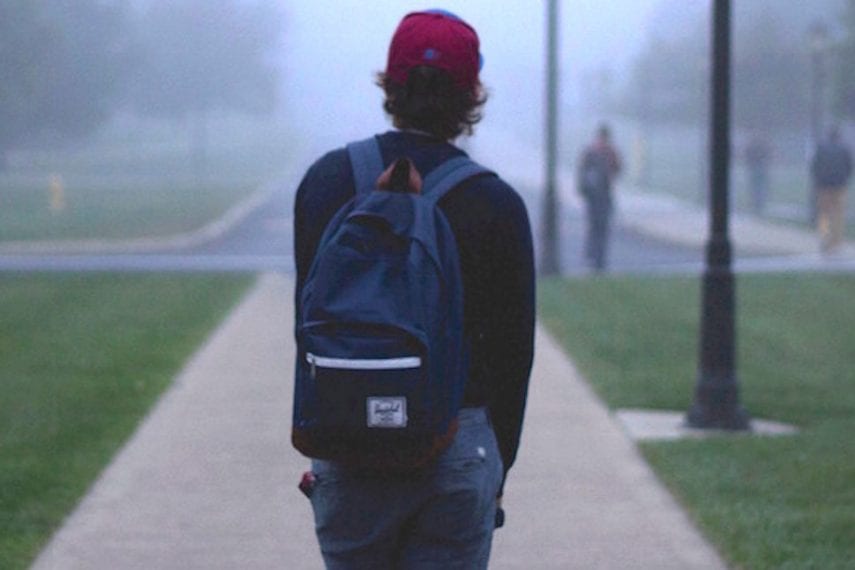 David still remembers the first day of college. His parents had driven him and an SUV full of belongings to the leafy New England campus, his mom worried that the sheets they bought wouldn’t fit on the bed, his dad told him to not have too much fun, and then David watched as they drove away. Alone in his dorm room, he was acutely aware of being on the cusp of adulthood, full of possibility. But in the coming months, he found himself falling deeper and deeper into the darkness of depression. Instead of going to class, he would watch Netflix for hours. When his newfound friends would ask him to hang out he came up with excuses to avoid leaving his room. On the occasions he did go out, his primary motive was to drink himself into oblivion to momentarily escape from the perpetual emptiness in his mind. “It was easy to hide what was really going on,” he says, “No one was monitoring me, no one there knew me well enough to see how bad things were.” It wasn’t until he went home for winter break and spent the whole time in bed that his parents grew concerned and found the resources he needed for treatment. “I wish I had gotten help earlier. I lost a year of school basically just being sick and then trying to get better. But I needed that time to get healthy and learn how to function. It gave me a fresh start.”

College is often mythologized as the best years of your life. The years you spend in pursuit of higher education should be a time of intellectual and social exploration, a time to discover yourself and the world around you, and a time to enjoy your first taste of freedom. But too often and increasingly, college becomes the backdrop against which mental health disorders emerge.

The Age of Vulnerability

The college years are a particularly vulnerable time for the presentation of mental illness. Your late teens and early twenties are prime time for many mental health disorders to emerge; 75% of mental illnesses begin by the time you reach 24. Schizophrenia and bipolar disorder have consistently been linked to young adulthood, with the former typically presenting between the ages of 16 and 25 and the latter between ages 15 and 30. However, other psychiatric conditions that used to emerge in later years are now increasingly showing up in young adults. Renowned psychiatrist Dr. Charles Nemeroff says, “[T]hirty years ago, the average person had their first depressive episode in their late forties or early fifties. The average age of onset right now in the United States is 24 years of age.” Today, 10% of college students have been diagnosed with or treated for depression, and many more report experiencing serious depressive symptoms that interfere with their ability to function. Meanwhile, anxiety disorders that often emerge as early as childhood take on increasing urgency in the face of new environments, pressures, and responsibilities. Anxiety disorders are now considered the most prevalent of all mental health diagnoses among college students, with approximately 16% of students receiving a diagnosis of or treatment for anxiety within the past 12 months.

While mental health disorders are typically rooted in complex genetic, biological, social, and experiential factors, the collegiate experience includes specific environmental factors that can trigger or aggravate psychiatric illnesses. Immersed in an unfamiliar milieu and removed from existing support networks, many students feel an acute sense of isolation and disorientation as they struggle to find their place. Some believe that the newfound freedom of college can create a kind of psychological shock for those who have been raised by overprotective parents whose well-intentioned but misguided nurturing drive prevented their children from learning how to make their own way in the world. The decreased quantity and quality of sleep that is a hallmark of the college experience for many can have a serious psychological impact and contribute to a number of mental health disorders. At the same time, the frantic pace of academics and high stakes of success can create overwhelming stress with severe emotional effects. William Deresiewicz, a English professor at Yale, says, “[T]he fact that we’ve created a system where kids are constantly busy, and have no time for solitude or reflection, is going to take its toll.” A number of highly publicized suicides and suicide attempts at elite colleges such as MIT, NYU, Harvard, and Yale have been blamed in part on pressure-cooker academic environments.

Even more alarmingly, internalized and external expectations of perfection along with problematic mental health policies of the colleges themselves combine to dissuade students from seeking help for their distress. One student at Yale, whose policies have come under scrutiny following the suicide of Luchang Wang, says that the school “creates a culture of shame and silencing and self-silencing,” preventing students from “feel[ing] that you can speak openly and be heard as a student about mental health issues.” The fear the social, academic, and institutional repercussions of disclosure may keep you from getting the medical intervention you need and can cause you to turn to self-destructive behaviors such as drinking, drug use, risky sexual behavior, and self-injury to cope with your pain.

College students from Leeds University share their experiences with mental health disorders to offer hope to others.

The good news for college students suffering from mental health disorders is that you’re not alone and there is help available. What’s more, the earlier you get help, the more likely you are to minimize the effects of your illness while optimizing your chances of lasting remission, even in cases of serious psychiatric disorders. Now is the time to harness your resiliency and capacity for learning to develop the skills you need to cope with psychological distress and environmental stressors and lay the foundation for sustained emotional and behavioral health. Early treatment can also prevent you from developing or halt the development of co-occurring disorders such as alcohol, drug, and process addictions, which commonly arise alongside or in response to emotional upheaval.

Many colleges are recognizing the increased need for mental health services and designing specialized programs to address the concerns of students. If on-campus and outpatient resources are not enough, residential mental health treatment can offer you intensive therapies in an immersive, supportive environment to provide rapid relief from suffering. Learning how to care for yourself and navigate the terrain of psychiatric illness can stop the progression of your disorder and allow you to return to your life renewed, armed with the resources to successfully reintegrate with the world around you, and with an enhanced capacity for facing personal, academic, and professional challenges. Chances are that you will eventually forget the details of your sophomore year mid-term exam, but the knowledge and wisdom you gain in treatment can buoy you for a lifetime.

Bridges to Recovery offers innovative, comprehensive treatment for a range of mental health disorders. Contact us to learn more about how our modern therapeutic program and compassionate clinicians can help you or your loved one.